Islanders – urban strategy and puzzle in one bottle (Mac) 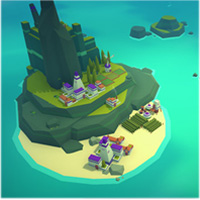 Usually urban planning strategies put a lot of different tasks for users. Players will not just stand at the head of the city or settlement, but literally build it from scratch, attract residents, and provide them with all necessary. However, the developers from the studio GrizzlyGames went the same way.

Islanders is something of a middle ground between an arcade, an urban strategy and a puzzle. In addition, the developers have abandoned many “strategic” mechanics, betting on graphics and simple gameplay, and running a little ahead, we can say that the game was both simple and exciting.

In many ways, the name of the game reflects its essence. In Islanders, users will have to build settlements and entire cities on fairly compact islands. At the same time, the game will not be familiar resources. Everything is tied to the “points” system. Starting to build a new island, users need to choose one of two available to choose from buildings – it can be a sawmill, farm, quarry, oyster farm, brewery, etc.

Then it will be just to place it in a suitable place on the island. After that, the points counter will be replenished with some points. Their number will depend directly on the location of the building. For example, when the fields are located near the mill, the overall score counter will increase faster, and if you place them on the other side of the island or put a few mills nearby – slower.

First, to open the next set of buildings you need to score only 20 points. However, over time, the requirements will grow – as a result, the bill will go to hundreds and even thousands. In addition, the place on the island will gradually end, and to collect the maximum number of points for each building will be increasingly difficult. The opening of additional islands helps to prolong the game. But to unlock them you also need to score a certain number of points.

If the buildings available for construction run out, and the points to unlock the next “set” will not be enough, the game will end. However, users can literally in a couple of clicks again to return to construction, but already on another island.

On the one hand, this approach does not pose any challenges to users – everything is easy and simple. But on the other hand, the Islanders are surprisingly addictive. The lack of complexity and rapid visible progress have led to the continued construction of the islands, building large and small settlements on them.