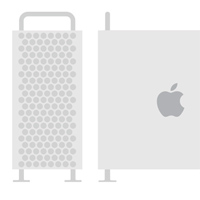 In addition to software innovations, the annual WWDC conference brought several new devices. Among them was a brand-new Mac Pro, aimed primarily at professionals who need maximum performance.

Apple took into account its past experience and, when developing the new Mac Pro, focused on the expediency and simplicity of the update. Especially for this purpose, the Coopertinos have returned to the usual desktop form of the hull. But at the same time made some changes in it, which affected the appearance of the computer.

The basis for the new Mac Pro is a steel skeleton. An aluminum body is put on top of it, and inside hides a model filling. According to The Coopertinos, it is as easy as possible to access computer components – this greatly facilitates the process of repair and upgrade. However, the last feature should be useful to users not soon.

The new Mac Pro is built on Xeon processors. At the same time, there are both relatively “slow” 8-core 16-stream chips to choose from, as well as “monsters” with 28 cores and 56 streams. Also on the motherboard there are 12 DIMS slots that allow you to place one and a half terabytes of DDR4 ECC RAM (2666-2933 MHz), and 8 PCI Express slots (4 of which are designed for two-slot cards, three single and one “half” for installation I/ O-cards).

In the basic modification, the computer is equipped with a graphics adapter Radeon Pro 580X. But if necessary, users can purchase a more powerful Radeon Pro Vega II Duo solution. And in the maximum set of such cards can be installed two. As a result, the total graphics memory will grow to 64 GB, and the processing power – up to 56 teraflops.

But that’s not all. To speed up your graphics and videos, Apple has come up with an Afterburner ProRes and ProRes RAW accelerator card. It provides a two-fold rendering acceleration in Final Cut Pro X. According to Apple, this solution makes it easy for the Mac Pro to process up to 3 8K rollers at the same time.

There are only two Mac Pro storage slots. Only one module is used in the database. It is occupied by sSD at 256GB. However, if necessary, users can significantly expand the available volume to 4TB.

As for the external ports, there are quite a lot of them. The Mac Pro features a PCIe card with two USB-A 3.0 and two Thunderbolt 3 (USB-C) ports. Another pair of Thunderbolt 3 are on the top panel, and at the bottom of the computer is two 10-gigabit Ethernet ports. For wireless communications, the computer has a Wi-Fi receiver 802.11ac and Bluetooth 5.0.

During the presentation, Apple announced only the cost of the basic version of the Mac Pro. It’s $5,999. The price of the top version of the novelty is now unknown. Also unknown is the date of the start of sales.