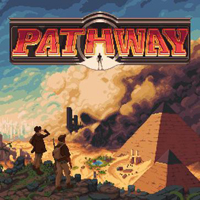 Developers from the studio Robotality decided to take an unusual step and released a game in many ways similar to the old adventure novels and movies in the spirit of “Indiana Jones.” Pathway has all the trappings of such an adventure: distant countries, long and dangerous hikes, ancient temples and archaeological excavations. The game even got soldiers of the Third Reich, who fanatically search for ancient artifacts. But despite the presence of all the attributes of a great adventure, Pathway is also there for what to “scold.”

The plot of history is quite simple: in 1936, the Third Reich begins to increase its influence in Europe and the Middle East, and among archaeologists actively discuss secret expeditions and mysterious artifacts. It is in this turbulent time a group of adventurerarchaeologists decides to recover in search of hidden treasures, so that they do not fall into the hands of the Nazis.

In total, Pathway users will be waiting for five big adventures, different from each other level of complexity and plot. However, the mechanics throughout the game will not change. At the beginning of the “operation” users will need to choose two heroes, each of which has its own mini-story and skills, if possible to pick up their equipment and then send them into the desert.

The missions themselves differ in the plot: somewhere you have to rescue a colleague from the captivity of the Nazis, and somewhere – to find an ancient artifact before the competition. At the same time, the gameplay tasks look about the same. Users will have to move their heroes between points on the map, fighting with opponents, exploring the ruins and trading with the locals. At the same time, it is skirmishes with enemies will make up a large part of the gameplay.

The battles are built on roughly the same mechanics as in XCOM: two actions on the move, partial and full of shelters, different enemies and step-by-step mode. Those who have previously played step-by-step tactical strategies will quickly deal with the combat system. In addition, the particular depth of combat collisions in Pathway do not differ. The game has no unique classes with its specific skills and tricks, nor any tiered locations, where opponents can be approached from different angles.

Another not-so-successful feature of Pathway can be considered excessive randomness. This results in the fact that on the map can go in a row several camps for recreation, but not a single point for refueling a car or a merchant, from which you can sell extra items. The situation is similar in the case of skirmishes with enemies. Heroes manage to miss literally at point-blank range. However, even with all these flaws, Pathway is a good adventure game with high-quality pixel graphics, interesting setting and good voice acting.

« Islanders – urban strategy and puzzle in one bottle (Mac)