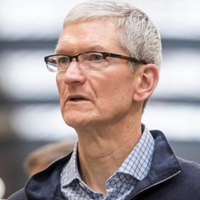 It is no secret that Apple actively buys up promising startups and companies. At the same time, The Coopertinos prefer not to comment on such purchases. It is for this reason that many transactions remain secret, or they become known very late. The other day, Tim Cook slightly opened the veil of secrecy, telling how often Apple makes such large “purchases.”

In an interview with CNBC, the head of Apple said that in the last six months they have acquired more than two dozen companies and startups. At the same time, Tim Cook did not share any details – the names and scope of the companies remained unknown.

According to the head of Apple, deals about the purchase are made about once every two to three weeks. Thus, we can say that for a year the iPhone manufacturer acquires at least 15-20 companies. But this year the “pace” is slightly higher.

Speaking to CNBC reporters, Tim Cook noted that when buying another startup or company, they pay attention primarily to intellectual property and talented developers.

« Voyeur simulator is available on iOS