Apple has developed retractable bumpers for the car 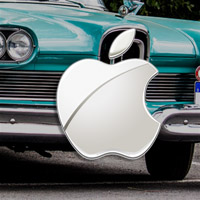 Despite the fact that Apple has never officially confirmed numerous rumors about the development of its own vehicle, The Coopertinos actively patented various automotive developments. For example, recently it became known that Apple has patented unusual bumpers.

As early as 2015, Apple filed an application with the U. S. Patent and Trademark Office, which described retractable bumpers for vehicles.

The document describes a certain inflatable structure, which is located behind the bumper and, if necessary, can be used to change its position. This option can be useful in a variety of situations. In particular, an additional air cushion can be a protection against small impacts. In addition, the ability to change the position of the bumper will be useful when parking the car in narrow places.

It is worth noting that the Coopertinos actively register different patents related to cars and vehicles. Initially, it was assumed that Apple will release its own electric car. However, according to the latest data, now the Coopertinos are focused on developing a system of autonomous driving.