Cellebrite has created a device to hack iPhone on iOS 12.3 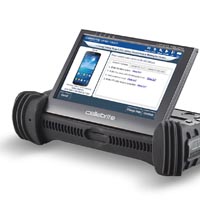 Last year, the Israeli company Cellebrite created an effective solution for hacking locked apple mobile devices. However, the Coopertinos quickly developed countermeasures that are aimed at protecting user data. Recently, representatives of Cellebrite announced the completion of work on a new “cracker.”

According to the employees of the Israeli company, the novelty called UFED Premium allows you to hack iPhones and iPads running iOS 12.3. The principle of the new device is not specified. However, it is known that it can also bypass the protection of devices on the Android platform.

The main “consumers” of Cellebrite products are state and law enforcement agencies of different countries. Typically, Israeli company devices are used to gain access to the contents of mobile devices of people suspected of committing crimes.

However, there are cases when Cellebrite products appeared at popular online auctions. And it was possible to buy it with big discounts.

« Apple joins large IT companies to work on joint project