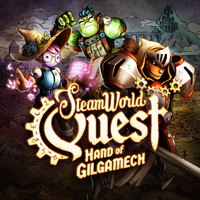 Over the past ten years, the Swedish studio Image and Form has produced five different games in four different settings. First, the developers created Tower Defense for Nintendo DSi, then released a curious platformer, then a fantastic turn-based strategy, then again platformer, and recently turned their attention to the genre of card games. At the same time, all projects are united by one universe – SteamWorld.

All games from the SteamWorld series combines stylish hand-drawn picture, funny characters, made in the form of steam robots, often created from different parts, a large number of “Easter” and a sea of humor. All of this is true for the latest game from Image and Form called SteamWorld zuest: Hand of Gilgamech.

In Hand of Gilgamech a lot of attention is paid to the plot. For almost 20 acts, the characters will explore ancient ruins, forests and old mines, meet unusual characters and, of course, fight with opponents.

Up to three heroes can take part in battles. Each character has his own specialization. For example, one better copes with physical blows, the other uses magic and alchemy, the third specializes in repair and defense, etc. This is especially true of battles with bosses.

As for the fights, they are somewhat reminiscent of a card game with elements of jRPG. Each of the characters has a set of cards. Three of the six cards can be played in one round. At the same time, if three cards of the same character were played in one move, at the end of their turn, the effect of the hero’s weapon will work.

In general, there are a lot of subtleties. However, SteamWorld doesn’t look particularly complicated. But to pass the game with one deck will not work. Users need not only to constantly search for new cards, but also regularly edit the deck, adjusting it to new opponents who may have immunity or partial protection against a certain type of damage.

To sum up, we can say that Image q Form again managed to create an interesting and atmospheric game about steam robots. The project does not look too complicated, overloaded, or delayed. On the passage of SteamWorld zuest: Hand of Gilgamech will take about 15-20 hours, and the fights themselves, although they keep users in suspense and make you think, but do not cross the line when the play becomes not interesting.