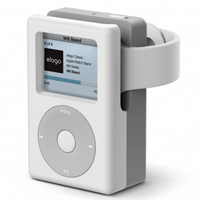 Recently, Elago, which specializes in the production of accessories for Apple devices, released a new stand for the Apple Watch. The main feature of the novelty is that it makes the apple smartwatch very similar to the classic iPod.

The main feature is the appearance. The stand is made of quality materials. In particular, from a fairly soft silicone, which will not leave any scratches on the body of the watch, and will facilitate the process of installing the charger in the appropriate recess.

As for the functionality of charging, everything is quite standard. It allows you to charge your smartwatch and can also be used as a retro alarm clock. The Elago W6 is compatible with all Apple Watch models, from the first to the last generation. The size of the watch also does not matter much. You can order an unusual stand on the official website of the manufacturer for 15 dollars of delivery.

It is worth noting that the Elago accessories line has some interesting stand-ups for apple smartwatches. For example, in the past, the company introduced a stand in the form of iMac G3 and Nintendo Game Boy. These accessories are also available for order on Elago’s official website.

Apple released a new iPod Touch: Apple 4 inches and the A10 »