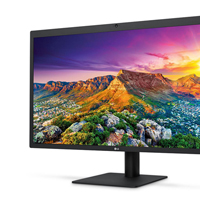 LG has released a new version of the UltraFine 5K Display monitor, which Apple is positioning as the best third-party solution for its devices. The novelty received a number of small changes, but in general the display is not much different from its predecessor. The price of the monitor remained the same – 1299 dollars.

UltraFine 5K Display is equipped with an IPS matrix with a resolution of 5120 x 2880 points, a maximum brightness of 500 nits and has a color coverage of P3. In addition, the manufacturer states that the monitor does not need calibration.

One of the features of the updated UltraFine 5K Display is the increased to 94 watt of transferable power. In addition, thanks to USB-C and Thunderbolt 3 interfaces, users can connect the monitor not only to the MacBook and Mac, but also to the iPad Pro 2018. However, at the moment it is not known what the resolution will be when connecting UltraFine 5K Display to the tablet.

As mentioned above, the updated 5K monitor is already available in the Apple Store. However, it is not yet possible to buy it in all regions. For example, in the Russian Apple Online Store, the updated UltraFine 5K Display is not yet available.

« In the US, iPhone XR sells best iPhone Xs and iPhone Xs Max