IPadOS Beta 1 review: a big boost for all iPads 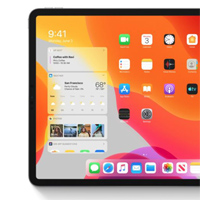 Over the past few years, Apple has been actively developing its mobile operating system, adding some features that were supposed to expand the iPad’s capabilities. This year, the Coopertinos decided to take the next step. As part of WWDC 2019, they actually announced the division of iOS into mobile and tablet versions.

IPadOS has really expanded the capabilities of apple tablets. The update has brought with it a number of improvements, turning the iPad into an even more functional gadget. However, going a little ahead, we can say that the apple tablet is still not able to replace the laptop. The device lacks flexibility, and the interface, tied to touch gestures, slightly reduces the speed of interaction with the system. At the same time, the update itself in any case can not be called passable.

The first thing users face after unlocking the iPad is an updated home screen. It now displays more icons. The Cupertinos revised the usual “grid” by adding another column and one line. Thus, the grid 5 by 4 gave way more convenient – 6 by 5.

Another feature of the home screen was the panel with widgets. In iPadOS, this is no longer an independent section, but an additional panel that can be displayed on the very first (main) screen.

If desired, users can even secure it on a permanent basis. In this case, the icons on the desktop will shift slightly to the right and will be located more compactly. This solution looks interesting and fresh – at least for the apple mobile operating system.

The Coopertinos did not leave the owners of the iPad without the long-awaited dark theme. It works exactly the same as on iOS 13, changing the look of all standard apps and menus. For the most part, third-party programs do not support this option. However, given the high interest of users in the dark theme, we can say that by the time the final version of iPadOS is released, the situation will change dramatically.

Coopertinoov has long given iPad owners the opportunity to place two windows on the tablet screen at once. However, it’s only in iPadOS that this feature has become really useful. Now you can run two windows of the same app on the same screen at once. For example, users can open two versions of Safari, two different notes, etc.

At this stage, the only downside to this feature is that it’s only available in standard applications. However, we can assume that by the time the final version of iPadOS is released, third-party developers should have time to adapt their utilities to new features.

In addition to Split View, Apple has also updated Slide Over. On iPadOS, in this mode, users can place not one, but several compact windows on the screen. They are displayed as a kind of stack. Switch between open windows can be swipes, and if you want compact windows can be placed in Split View mode or deployed to the full screen with just one gesture. It’s especially convenient to interact with compact versions of miniatures on the big screen of the iPad Pro.

Apple has focused on the gestures when working on the new mobile operating system. iOS 13 and iPadOS have a few “links” that help you quickly save, paste, delete, highlight, and undo activities. They make it much easier to interact with text. However, it is difficult to say how convenient such gestures will be with everyday use. For a few days of using iPadOS did not manage to get used to them – it was necessary to keep in mind a new feature.

Unlike gestures, the 3D Touch software analogue that appeared on iPadOS was easy to get used to. Now, with a long click on the app icon, users can call a contextual menu and quickly select one of the pre-set actions. For the Camera, it’s a video recording or taking a selfie, and for a twitter client it’s sending a new recording.

Over the past few years, Apple’s owners have asked Apple to add a full version of Safari to the iPad, and finally the Coopertinos have heard. In iPadOS, the mobile browser has been replaced by a real desktop version. This means that Safari will now open mostly desktop versions of the sites.

But the most important thing is that now many popular web services work correctly in the browser. For example, Google Docs. It has become more convenient to work with social networks. Especially this innovation should be appreciated by users of 12-inch iPad Pro.

With the release of iPadOS, the standard file manager has grown significantly. Now it looks more like a MacOS Finder, not a mobile app. And this applies to both functionality and interface. In particular, a separate column is available on the iPad in the Files app, which displays all the important information about the file (creation date, size, thumbnail, tags, etc.).

But the main feature is still support for flash drives, external drives and memory cards. Users can now easily copy from flash drives and write new information on them. However, it is necessary to take into account that for all these manipulations will need special adapters. And the process of recording data on an external drive is not very fast. But the trend is definitely pleasing.

Some users have long dreamed of Apple being able to connect the mouse to the iPad, and only now has this option become available. At the same time, the company notes that the new feature is designed primarily for people with disabilities. The rest of the Coopertinos are offered to continue to use touch input. However, this does not upset users.

It is noteworthy that you can connect to the iPad almost any mouse – both wireless and wired. However, in the latter case, users will need an adapter. It’s also worth bearing in mind that iPadOS in most cases doesn’t recognize clicking on additional mouse keys – now the system “understands” only by pressing the left button and scrolling the wheel.

As mentioned above, iPadOS has brought with it quite a lot of interesting features. However, at this stage to use the operating system is not too comfortable. The first beta works with significant delays, the interface has enough places with labels on top of each other, and many third-party applications are very unstable. It is possible that by the time the first public beta is released, the situation will change somewhat and the system will start to work better. In the meantime, it’s too early to put iPadOS.

« 5 Reasons Why VideoProc Is the Best Video Editor for Beginners