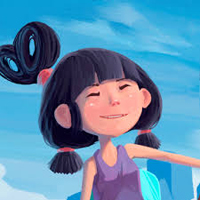 Today, many believe that the runner is a purely mobile genre. However, from time to time similar projects appear on large platforms. And on computers, such games, usually have more depth and offer users not only endlessly “run” on different levels, but also, for example, perform a variety of tasks.

The recently released Summer Catchers is an excellent exemplary adventure runner for large platforms. In the story, users will meet a girl who lives in the North. At one point, she decides to go on a long journey south to the summer heat and boundless ocean.

On the way to the ultimate goal of the main character will visit several different locations, get acquainted with unusual characters and perform a lot of tasks. But the main thing you have to do is to drive vehicles and try to avoid collisions with obstacles. With the latter will help special things: the bumper will be useful in order to remove the road pole, the springboard will jump over the abyss, the accelerator will allow you to overcome a high hill, etc.

New items will be unlocked as you pass and can be purchased in special stores. But the main difficulty is that at one point in time only three “skills” are displayed, and they appear randomly. This means that at the right time, users may simply not have the right thing to fly over the abyss or knock down a pole. At the same time, you can sort through the “skills” only by activating those not needed at the moment.

In general, the developers of Summer Catchers did not wise and come up with some unusual mechanics. Everything is quite standard and familiar to fans of runners. However, given the high enough dynamics of the game, the girl’s journey to the ocean looks brisk and even exciting. Summer Catchers looks particularly dynamic in battles with bosses. Users need not only to monitor obstacles, but also to monitor the behavior of bosses, as well as in time to activate the necessary “skills.” And all this happens at quite high speeds.

Summer Catchers is a unique project in its own way. Developers managed to combine in one game not very popular on “big” platforms mechanics, interesting characters, dynamic gameplay and season it all with pixel graphics and a very atmospheric soundtrack.

« World in waiting: The launch date of the new Apple iPad has appeared on the network

Whispers of a Machine – a small town, murder and cyberpunk »