Whispers of a Machine – a small town, murder and cyberpunk 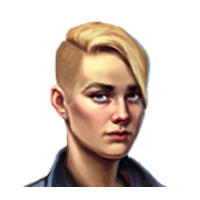 Developers from the studio Clifftop Games announced themselves relatively recently. Their first project – an old-school quest called Kathy Rain – they released about three years ago. At the same time, the game was quite successful and liked many fans of the genre. This year, Clifftop Games released a new project called Whispers of a Machine.

In short, the novelty is in many ways superior to the first work of the Swedish studio. This applies to both graphics and “filling.” It is evident that the developers have tried to take into account their past experience, as well as slightly replenished the budget. As a result, Whispers of a Machine is a very good fantastic cyberpunk Adventure with a touch of noir.

The plot of the game is quite standard and includes most typical genre cliches. In Whispers of a Machine users will wait for a world that has survived a global catastrophe, a harsh main character who works round the clock, a small town and a series of mysterious murders. But despite the abundance of standard plot moves and turns to follow the development of the story is quite interesting. The only negative – to immerse yourself in the plot will need knowledge of English. There is no localization in the game. This applies to both mobile and desktop versions of Whispers of a Machine.

In its form, the cyberpunk quest from Clifftop Games is a typical Point-and-click adventure, in which users have to collect items and communicate with different characters. At the same time, the developers deliberately did not specifically complicate the gameplay: no pixelgaming or illogical puzzles.

In addition, the authors paid a lot of attention to the surroundings and small details, which help to better feel the atmosphere. These small parts include cyber implants. They help in gathering evidence, when talking to suspects, etc.

Whispers of a Machine is not an ideal game. She has her flaws. For example, to fully understand the plot will need a fairly high level of knowledge of English, you can also note not too expressive game world. However, otherwise the new project from the Swedish studio Clifftop Games is very good.