Microsoft is working on a flexible Surface 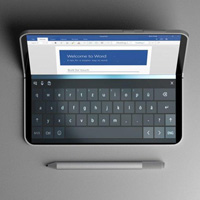 This year several manufacturers have shown their flexible smartphones. At the same time, the number of companies that are interested in this topic is constantly growing. For example, network sources today reported that Microsoft could expand its Surface lineup in the future by releasing a flexible, two-screen device.

Data on the technical characteristics of the secret gadget is almost non-existent. It is known only that it will be equipped with two screens with a diagonal of 9 inches and a ratio of sides 4:3. Also in the network there are assumptions that the basis for the novelty will be 10 nm Intel processor.

Sources claim that the flexible Microsoft Surface will run the Windows Core OS operating system. The latter is a simplified version of Windows 10. At the same time, Core OS should support Android apps.

What exactly the new device from the software giant will look like is now unknown. It is possible that the novelty will be something like a compact laptop with two screens.