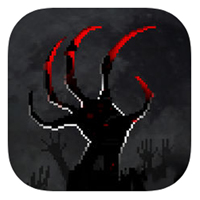 A few years ago, the studio NoClip together with the publisher Gambitious Digital Entertainment released an unusual game about zombies called zombie Night Terror. The project stood out from other zombie arcades, so it quickly became popular. Almost three years after the official release on the big platforms of the zombie Night Terror has reached iOS.

In the zombie Night Terror users have to literally control the zombie uprising. Do not fight it, do not try to control, namely to manage a large horde of dead dead, making their way through a variety of levels.

The developers focused on new mechanics and different puzzles. However, this does not mean that there is no plot at all in the night terror. In the beginning, users are introduced to the reasons that led to the zombie uprising (a specialist professor had a hand in this), and then just provide small refinements. The game does not shine unexpected plot twists, and the plot contains a lot of cliches. But despite this, the developers managed to create a very solid and slender story, which is quite interesting to follow.

As for the mechanics, the crowd of zombies is somewhat reminiscent of lemmings. Revived dead people just wander forward, and users need to do so that they can pass the entire level from start to finish. This can be done either manually or using different mutations and abilities. For example, you can “grow” zombies that control other dead people or use zombies that can move on vertical surfaces, etc.

Each level is a kind of puzzle. The main task is to fulfill a special condition that will help in the spread of infection. Naturally on the way a horde of zombies will meet different obstacles and enemies. And the latter can cause a lot of trouble: even a single person with a gun can greatly reduce the number of zombies. And if on the way there is a policeman with a shield or a machine gun – the situation can quickly become critical.

The night terror is generally unevenly complex. Some levels are too easy, while others make you think well. Additional problems can create special tests. However, the latter do not have to pass. They are created more for those who want to play in the zombie Night Terror longer.

« Irony Curtain: From Matryoshka with Love – adventures in the Matryoshka (Mac)